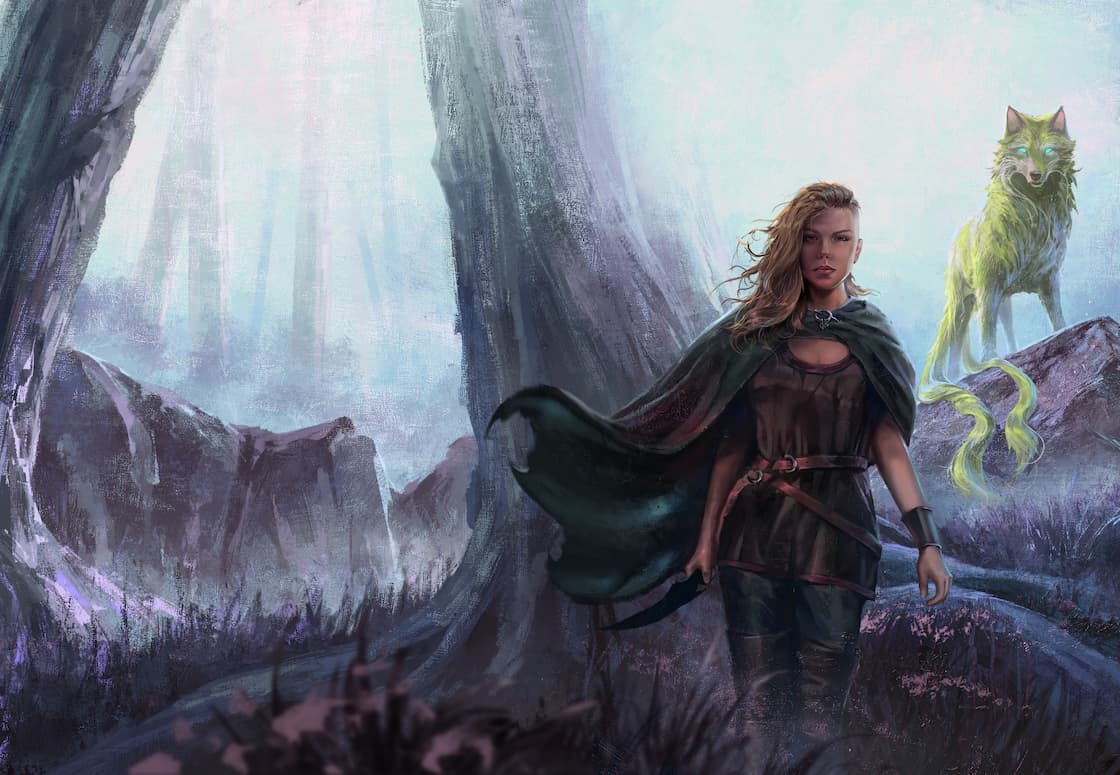 Where is the Apogee headed?

***PRE-READ*** If you can't remember what all happened in Voice of War, check out the recap found here: The Story Until Now.

It was a curious feeling, being trapped in his own mind. Helpless. Powerless. Looking on as each step rebelled against him. Every breath had become a dark reminder of his own insanity. Of the sacrifice he’d made. Of that singular moment when he’d given up control to save his family. When Chrys had once again become…the Apogee.

A week had passed since the coreseal had shattered. The accompanying quakes had wreaked havoc across Alchea, causing unstable buildings to collapse, stone roads to crack, and avalanches from the mountains to come crashing down with fury. The Apogee seemed to care about none of it. Nor did he care if he was seen. He wanted only to reach his destination. As they ascended the Everstone mountains, Chrys thought it may have something to do with the thread-dead obsidian that Henna had found.

The Apogee reached into his pocket and pulled out a pocket watch. Chrys groaned inside at the reminder of his son who had received the gift from Great Lord Malachus. It was the only physical reminder he had left of his family, and the Apogee, annoyed at its mere existence, tossed it on the ground with disregard. It landed along the well-worn mountain trail, and the last Chrys saw of it was a shimmer in the corner of his eye.

He felt his mind slacken into deep despair. He'd lost so much—his wife most of all. The memory of his own eyes meeting hers in the Fairenwild—so pleading, so hopeful—just before he turned and walked away. She would never forgive him. He was the husband that deserted his wife. The father that abandoned his son. The friend that forsook. The man that slaughtered. Even if he could regain control, there was no returning to how life was before.

His boots trudged through a tangle of weeds as they made their way through a familiar mountain pass. The last time he’d walked this ground was when he’d returned from a massacre. It felt fitting. The first time he’d let the dark part of himself take control was just beyond the peaks of these mountains, and now he returned with the darkness once again in control.

The Apogee continued onward, following a dim set of boot prints toward Ripshire Valley, the site of the slaughter. Beyond that was the unknown. The Wastelands. Home to the small, inhuman people that fought savagely to defend their mountain border.

He wondered where Iriel might be. If their son, Aydin, was safe. He’d left them in the Fairenwild, in the midst of flames and bloodshed, with nowhere to go. He would never forgive himself for that. What is a man if he cannot protect those he loves?

The sun had begun its descent but, at such an altitude, it seemed to drag on for an eternity. Fresh footprints appeared. They passed a soiled patch of dirt. Chrys had a guess at who they may find ahead. For their sake, he hoped that he was wrong, that it was a lone hiker. Or even a small group of climbers. However unlikely, he hoped, because he knew the grim alternative.

“Mmmm,” the Apogee whispered as he inspected the footprints.

His feet trampled forward, following tracks of pressed grass until they rounded a small peak. Alchean soldiers huddled around a fire in the entrance of a large cave. The same cave from which the obsidian had come. High General Henna’s soldiers were still exploring its deep tunnels.

One of the soldiers looked over and saw them. There did not seem to be any official lookout on duty, just those nearest the fire. “Hello!” he shouted through the wind.

Chrys felt his hand raise into the air, a spurious white flag. The Apogee smiled in return as they approached the camp. Half of the soldiers were asleep in the cave, safe from the wind and latent rain, tucked beneath piles of wool blankets. Those around the fire stayed seated, unafraid of the stranger approaching. Blankets pulled tight around their shoulders as they shared sips from a warm broth.

“Finally. We’ve been waiting to hear from the general for a week.”

The soldiers all stared at him as he drew near. One gestured next to himself on the log they were using as a bench. “The wind is freezing out there. Come on in.”

The Apogee cocked his head to the side. “I think I will.”

He opened himself to threadlight, watching as his veins lit a bright, cerulean blue and warmth flooded through him. Hundreds of thin lines of incandescent light illuminated before him, connecting him to the world. His veins, like rivers of glacial water, flowed blue beneath his wind-bitten skin. By the time the soldiers noticed, it was too late.

Chrys felt something stir within him, a cold storm seething in his chest. Then, it moved, reaching out, searching, grasping, inviting, until, finally, it delved into the depths of the closest guard’s very soul. Energy flowed through the connection, and the guard brought his own blade to his chest. That same man looked down in shock as he slid the sword between his own ribs.

The Apogee moved forward with a cold intensity. He grabbed the soldier’s blade off the ground and dragged it across the dirt as he entered the cave. Those awake, stumbled back. Those asleep awoke to death.

Chrys felt anger swelling within the Apogee as he moved through the camp, and in that anger, he felt the barrier that bound him weaken.

Please, they are innocent, Chrys begged.

The Apogee snarled. There can be no mercy.

The remaining soldiers stared at the Apogee from within the cave, knowing well that there was little they could do against a threadweaver. Little did they know, the Apogee was much more than that now.

One brave soldier stepped forward. The others stood cautiously behind him. “General Valerian. You don’t have to do this. I was there during the War. I saw the aftermath, and I saw the regret in your eyes. Please, we’ve done nothing.”

Chrys recognized the man. Henry, perhaps? He, along with many others, had descended the mountain to observe the massacre in Ripshire Valley. He knew what the Apogee was capable of.

In that still moment between deaths, Chrys threw all of his will against the barrier in his mind. His hope and anger joined together in a massive wave, crashing against the wall, trying to regain control.

But the wall held firm, and the Apogee clenched his teeth. "You will pay for that."

His mind reached out to Henry; a bridge formed between them. Then, something flowed from Chrys into the soldier. Henry screamed, clutching his skull with both hands as he fell to his knees. Somewhere, even deeper in the recesses of his own mind, Chrys felt something odd, the vibration of a plucked string.

“Kill yourself,” the Apogee demanded.

Henry brought a blade to his neck and pulled.

Curses erupted throughout the line of soldiers as his body fell to the dirt.

“I need two of you,” the Apogee said. He pointed to the only female soldier, a sharp-faced woman with shoulder-length dark hair pulled back in a tail. “You will be one. Come here. Of the rest of you, I will take the strongest. Choose amongst yourselves, or I will choose for you.”

He tossed the sword forward at their feet and, for a moment, the soldiers stood in silence, staring.

Chrys needed to help. With every ounce of his bound soul, he wanted to protect them. To save them from himself. From the dark part of his soul that had taken control.

The dark-haired woman ran forward just as a man with red hair turned to his neighbor and rammed a knife through his gut. The others gasped in shock, not knowing what they should do. The same red-haired man attacked another, and, with surprising speed, the soldiers turned on each other. One man tried to grab the sword off the ground but was brought down with a savage strike to his spine. Teeth bit into necks. Fingers jammed into eyes. Blades ripped through cartilage.

Not all fought—some tried to hold onto their honor—but it ended the same, nonetheless.

Chrys felt his hope flutter away.

When the brawl ended, dead men lay bleeding out on the rocky floor. The red-haired man was the only soldier left standing, despite a cut down his cheek that would surely scar. His build and hair reminded Chrys of Laz but, where Laz was carefree and naive, this man had the look of a feral beast that found himself just where he’d always wanted to be.

“Do not use that name,” the Apogee growled. He eyed the woman. “We will come to know each other quite intimately. But first, tell me your names.”

“I’m Velan.” The red-haired man brought a fist to his chest.

The woman held back tears, but Chrys could see the fear in her eyes. Still, bravely, she replied, “Autelle.”

“Good. You may call me Relek. You cannot yet understand, but you have been chosen. You will be gods among men.” He gestured to the corpses littering the cave. “Burn the bodies. We do not want an army coming over the pass before we are ready for them.”

Velan nodded and got to work.

Autelle joined in with tears in her eyes. Together, they stacked the bodies into a pyre, stuffed it with moss and mushrooms, and let it burn.

“Mmmm,” the Apogee said, watching. “Let us go. She will be waiting.”