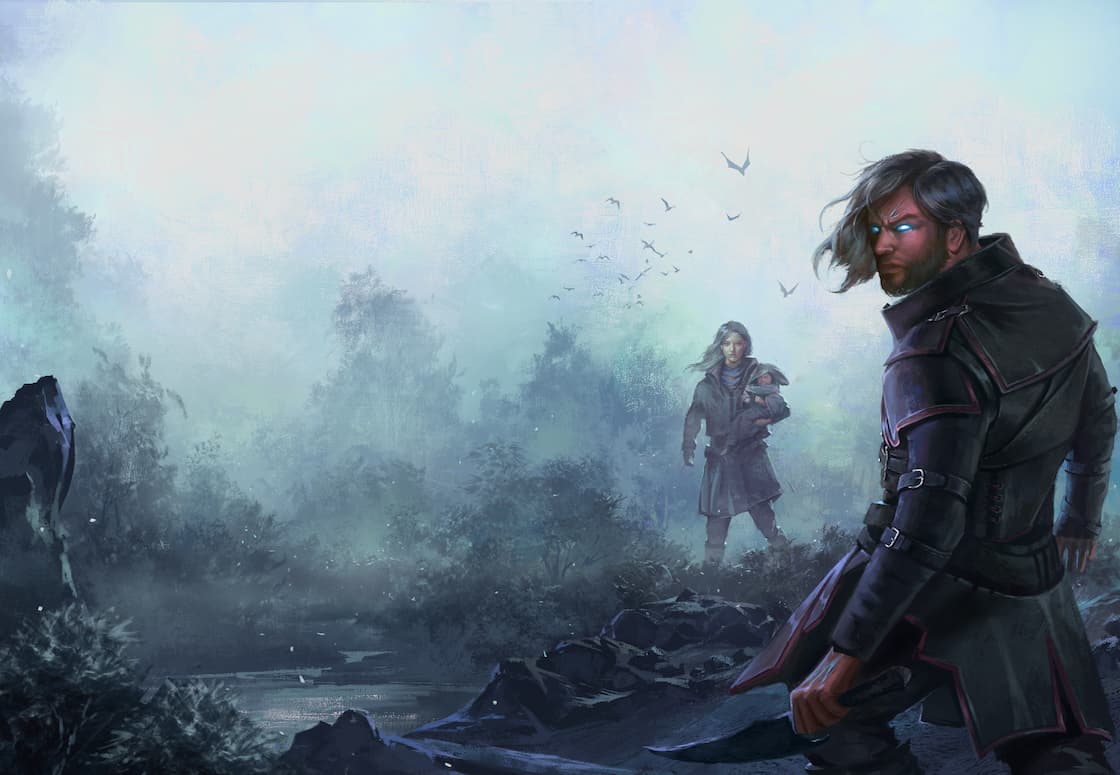 Threadlight: The Story Until Now — 1

The Story Until Now

***WARNING*** Do not read this unless you have already finished reading all of Voice of War. This is meant to be read before reading Stones of Light.

While expecting their first child, Chrys Valerian and his wife, Iriel, attended the Rite of Revelation for their friends, Luther and Emory. When the child is revealed to be an achromat (brown eyes), he is blinded and taken to be a priest of the Order of Alchaeus. Outside the Temple, Iriel almost loses their child but is saved by a stranger who also gives Chrys a thread-dead obsidian dagger.

Chrys goes on to investigate the Bloodthieves, where he rescues a young girl named Laurel, who runs away back to her home in the Fairenwild. When she returns to Zedalum, she loses her position as a Messenger, and also loses her best friend, a chromawolf named Asher, as he returns to his pack in the wild.

Eventually, Chrys discovers the truth of the Bloodthieves, that they are headed by an Amber threadweaver named Alabella, and fellow high general, Jurius, is working for her. Chrys’ son, Aydin, is born and they take him in for his own Rite of Revelation, where they learn that, not only is he an Amber threadweaver, but Father Xalan is a Zeda spy. They run away to the Fairenwild where Chrys, Iriel, and Aydin narrowly escape Jurius with the help of a pack of hungry chromawolves and Laurel, while Father Xalan is captured.

Laurel brings Chrys and his family to Zedalum, where they meet the Elders and learn about Amber threadweavers and the coreseal. Shortly after, Chrys’ mother, Willow, arrives and shares the truth: Chrys was born in Zedalum. They soon realize that Father Xalan is really Pandan, Willow’s brother and Chrys’ uncle. They devise a plan to rescue him. Laurel and Willow recruit Chrys’ old crew (Luther, Laz, and Reina) to break out Pandan from Endin Keep’s prison.

At the same time, far to the south in Cynosure, Alverax Blightwood wakes up in a pit of bones. He soon discovers that he is an Obsidian threadweaver and decides to use his new power to get revenge on Jelium (an Amber threadweaver) for killing his father. The plan backfires and he narrowly escapes. He decides to leave Cynosure and head north. The leader of the caravan betrays him and hands him over to Alabella, who takes him into the Bloodthieves.

While Laurel, Willow, and the crew try to break out Pandan, they come face to face with High General Henna. She chases them through the keep, and Willow leads the group to Jurius’ room. When he emerges, a fight ensues, and Jurius kills Pandan. Then Laurel kills Jurius, and in his final moments, he turns the dagger around and stabs Laurel in the heart.

Alverax joins Alabella and a small army of Bloodthieves into the Fairenwild, where they set fire to the forest. The people of Zedalum abandon their treetop homes, dropping down onto the Wonderstone so they can flee. The Bloodthieves attack the unarmed Zeda people, and Alverax watches in horror.

When Chrys brings down Iriel and Aydin, the child’s Amber powers lash out and bind Iriel and the baby to the Wonderstone, crushing them. Chrys, in an attempt to save them, finally gives into the Apogee and shows amazing powers as he slaughters dozens. He seeks out Alabella but is bound by Amber threads while she flees.

Alverax rushes forward when he sees a woman and child dying and uses all of his power to break the threads of the wonderstone. The earth shakes.

In the end, Laurel is still alive, but she has lost her ability to threadweave and is in the care of Alabella. Alverax is alive, heading west toward Felia with the Zeda people. And Chrys—still controlled by the Apogee—abandons his family and heads east.

The epilogue concludes with an odd woman exiting a holy cave in the Wastelands, looking for her brother.